Some of you may be aware that Binge has been on an indefinite hiatus. We're making a small comeback with a series of mini reviews: reviews of dishes instead of full-blown restaurant reviews. This is the first in the series, and so we chose a trio of dishes to kick off the section.

Liath has been open for a while, but we got around to ordering it during the lockdown because of COVID-19. Despite being one Michelin-starred, Liath has a "to go" menu that they introduced specifically for the lockdown. "Liath To Go is a new project offering no-contact take out dinner that consist of a starter, main course and dessert for you to easily assemble/heat in your home and have your go at learning some restaurant techniques to finish and plate your meal," says their website.

We were able to order the Spring Menu 1.2 May 2020, which included squid-onion-saltwater (starter), beef short rib-kelp-sea vegetables (main), and dark chocolate-preserved raspberries (dessert). All three came in plastic boxes, with their respective parts sealed in smaller plastic containers, and a set of detailed instructions for reheating and plating.

The squid-onion-saltwater took five minutes to prepare. We had to start off by spreading a teaspoon each of black saltwater cream in the middle of two plates. Next, an "onion and squid ink rock" was placed next to the cream. The pata negra or lard glass was placed by the side of the onion rock, after being peeled away from acetate. Finally, the squid needed to be sealed in some olive oil in a frying pan and added on top of the saltwater cream, with the salt-and-pepper seasoning provided. It turned out to be a dish of immense flavour, the saltwater cream complementing the squid perfectly. The "onion rock" was soft and moist, and added another layer, while the pata negra was delicate and needed to be eaten on its own to be able to taste well.

A main of beef short rib-kelp-sea vegetables (main photo) took a bit longer to prepare (we recommend you start preparing it before the squid). The 25 minutes preparation time included reheating the short rib for 20 minutes in the oven, reheating the fermented mushroom puree and port glaze in the microwave for ten seconds, and cooking the kelp noodles with smoked cream in a pot with two tablespoons of water. The pickled sandwort needed to placed in the 7 o'clock position on the plates, followed by the mushroom puree at 10 o'clock, and the kelp noodles at 2 o'clock. The noodles had to be topped with edible flowers and sprigs, namely purslane, rock samphire green buds and scurvy grass flowers. It was a pretty sight when done. The beef disintegrated with the gentle push of a knife and fork, and tasted of the port glaze that it had been bathed in. The kelp noodles added a new textural dimension, being salty and chewy. The pickled sandwort was a nice touch, its pickled taste going well with the tender beef.

With the beef, we were given mash to be heated in the microwave for two minutes and 30 seconds, and to be mixed with the truffle salsa provided. To be served in a separate bowl, this made for a lush side.

We haven't tasted Liath's other meal sets (and don't mean to compete with Michelin), hence the 4.5 stars. Perhaps once the lockdown is eased and we get to dine at the restaurant, we can confidently give the place 5 stars and say it was the first place in the magazine to be awarded as such. 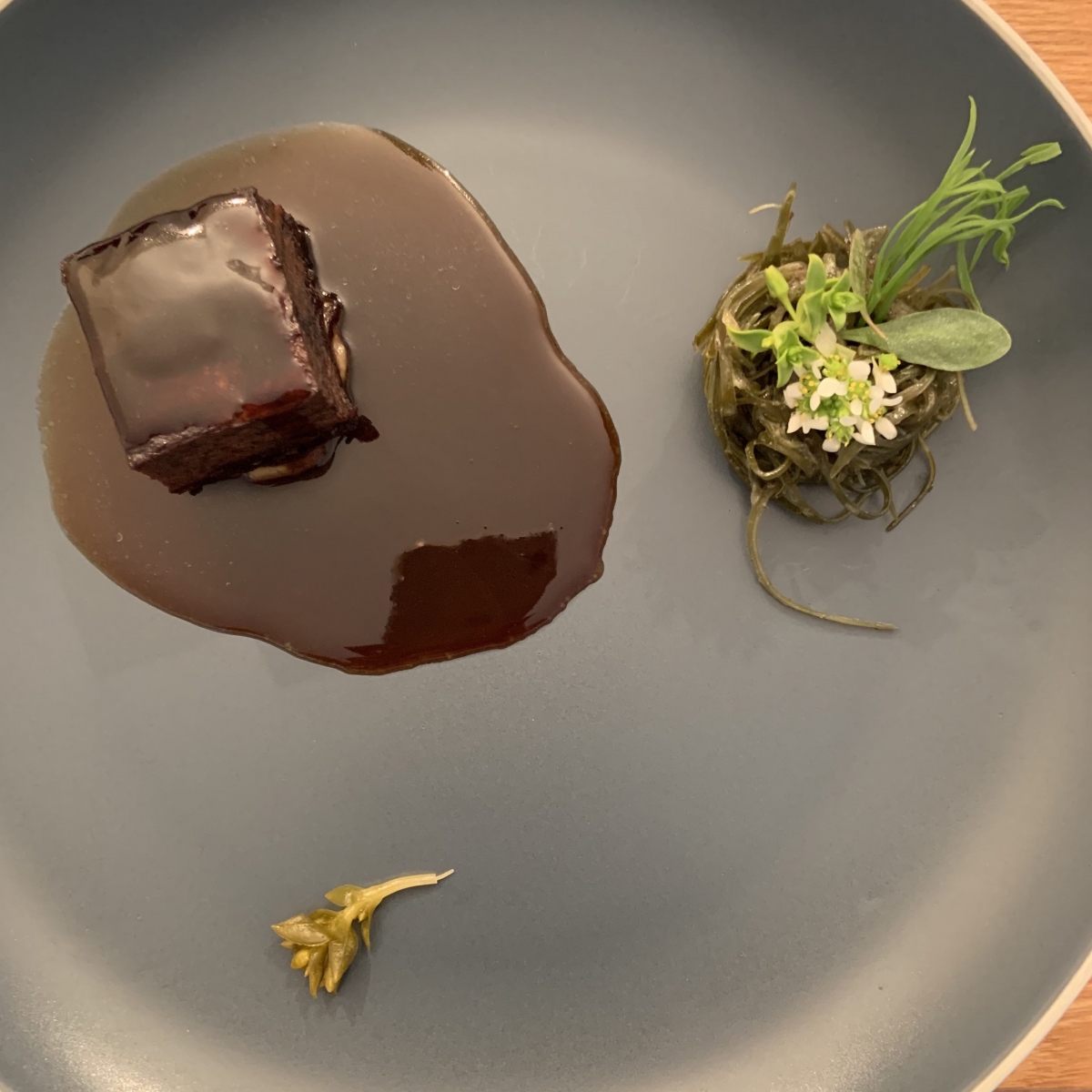