A Vietnamese restaurant in Hauz Khas sounded appealing for two reasons: one, that it was in the quieter main market instead of the overcrowded Hauz Khas Village; two, that it wasn't as expensive as the only other full-fledged Vietnamese restaurant in the city (Blue Ginger in Taj Palace). Little did we expect that there might be a game-changing connection to what we thought we had managed to avoid: the chef-owner at Little Saigon and former head chef at Blue Ginger are the same person.

Walking in with justifiably high expectations, we settled around tables that were actually antique sewing machines holding up thick glass. Star chef Hannah Thao made us feel like we were dining at her house, even if only because she followed all her recommendations with "it's very good, let me make it for you".

Goi cuon chay (cold rice paper rolls with tofu and vegetables) were crunchy, and tasted even better with the fish sauce that Hannah leaves around on each table. A bun thit nuong (a fresh rice noodle salad with grilled meat) overshadowed it, though—the pork bits crumbled to smithereens without needing to be chewed.

If the salad overshadowed other things, the prawns from the specials menu stole the spotlight. Cooked in a sweet and slightly spicy tamarind sauce, they tasted as if they had been slow-roasted over a charcoal fire. The elasticity characteristic of prawns had been replaced by a pleasant softness, making them unlike those found in coastal cuisine and classic South East Asian instead.

We were still hungry, so Hannah suggested we try the sticky rice with chicken. The meat was very spicy but the rice took some of the heat away, and Hannah's fish sauce worked just as well with this main.

A drink of calamansi juice with ginger soothed our tongues, although the candied ginger felt too much for the already sweet fruit juice. An artichoke iced tea was unusual—more subtle, and ideal to go with the excess of other flavours.

Considering most of the food had been impressive, we excitedly ordered ice cream from dessert. Finding it tough to take a call between coconut and strawberry cheesecake, we decided on the latter, only to find out it hadn't been made in-house but was London Dairy-bought. The Vietnamese grass jelly seemed a valid effort in adding an indigenous touch, but wasn't bold enough to take the cake.

Hannah explained between orders—half apologetic and half hassled—that being new and short-staffed doesn't leave much time for preparing dessert on her own. We don't judge her too harshly; not too many people run an unassuming Vietnamese restaurant that's thronged enough to warrant reservation in this city. 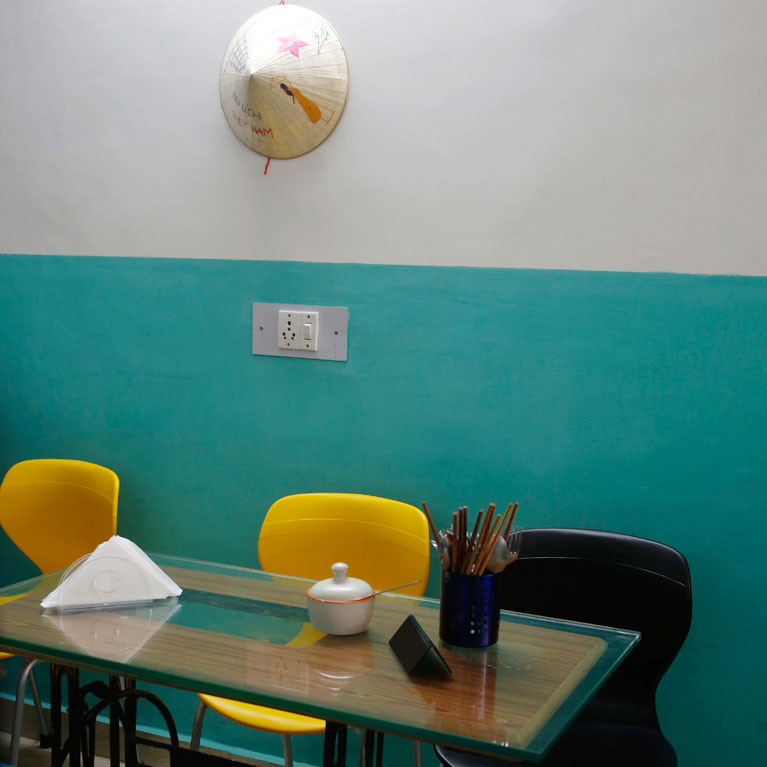